Though officially part of Foleshill, Longford has retained a distinctive identity that marks it out from the other hamlets that make up Foleshill. Its location part way between the coal mines of Bedworth and the city of Coventry with the road, rail and canal links passing through it, made it a natural place for early industrial development. It was the main centre of upper Foleshill and with brickworks, gas works, electricity power station and the Coventry Fat and Bone Company established in the area by the early twentieth century, Longford was probably not the most pleasant of environments in which to live! However, there is a remarkable amount of the physical fabric of this community that has survived the changes of the last two hundred years giving it sense of continuity that most other areas of Coventry have lost. Certain parts of this district, if located elsewhere in Coventry, would have been preserved years ago. It is to be hoped that the same benefits that have preserved the best of Allesley can be applied to Longford.

It takes no great scholar to work out the origin of this road name. Whilst not the highest spot in the area it was obviously sufficiently exposed to make it worthwhile to build a windmill. According to the 1775 enclosure map it would have been located to the north side of the road near where Recreation Road is now found. This view is taken from the junction of Windmill Road Longford Road. The rather gloomy view for many of these houses, as today, is to look out on Foleshill Cemetery to the south side of the road.The large house to the right is in fact the cemetery lodge.

One of the joys of Longford is the many different little bits of townscape unique to this area, either because they have been demolished elsewhere in the city or they always were peculiar to this part of Coventry. The square, seems to have its origins in the last century to judge from the architecture, but whether they replaced older buildings it is difficult to know. This was the site of Longford Wake, a fair held during the third week of August. Late in the nineteenth century it was moved to a local field, but the custom died out some while ago. Most of these buildings still survive as private homes, though most are now covered in various forms of rendering. The shop on the right has disappeared under the expansion of the Saracens Head. The lack of sensitivity that has allowed the mess of buildings that face these houses is deplorable. It greatly detracts from an otherwise fascinating area. 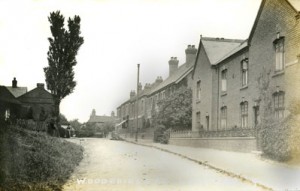 Woodshires Green was one of the many small hamlets that made up the district north of the town centre. It is now on the margins of the present day city; the boundary with Warwickshire passing within a few hundred yards of the end house shown here. The Coventry and Nuneaton branch railway still cuts it off from Longford, but the building of the houses to the right, in the first decade of this century, filled the last remaining area of open road between it and Longford. The closure of Rowley Lane with the opening of the new link road has brought some peace back to this area. 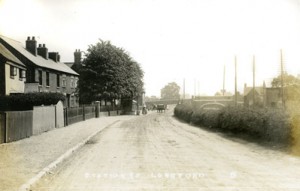 The houses shown in Station Road date from half a century or so earlier. Their pleasant situation alongside the canal does not reflect the life-style of many of their original inhabitants who slaved in the local coalmines between Coventry and Nuneaton. Though known at the time as Station Road, leading as it does to Longford Station, the modern name of Sydnall Road has much more ancient associations with the area. It has been variously the old name for Hawkesbury, also the name of one of the pre-enclosure open fields of Foleshill and the name of an eighteenth century coalmine created in that open field.